Small, visible and tangible wins:
Getting a community and law enforcement agencies to think differently about the criminal justice system

Brownsville, Brooklyn is only 6.5 miles from the UN Secretariat building, but it feels like a world away. Though it abuts Crown Heights and Bedford-Stuyvesant, gentrification and an influx of economic development have not extended to Brownsville, a 2-square mile trapezoid of land that hosts the highest concentration of public housing in the City of New York.  Though it is a vibrant community of long-time residents, Brownsville is known more for its high homicide rate than for its shops, restaurants and local businesses.
One 27 April, a delegation from DPKO’s Office of Rule of Law and Security Institutions (OROLSI) visited the Brownsville Community Justice Center.  Over the next three to five years, the Center will establish a community court, with a full time judge who will engage in four key areas: diversion programmes; alternatives to incarceration and confinement; prisoner re-entry; and “crossover youth”, young people who have been involved with multiple state institutions, such as foster care and the criminal justice system.
“We don’t use the word ‘court’ in our name,” explained Director James Brodick, “We call it a ‘Community Justice Center’.  For most people, going to court means something bad has happened in your life.  We will have a court eventually, but court shouldn’t be the main reason or the only reason you come here.”  Now five years old, the Justice Center is already providing a range of services – from legal aid to youth programming – to more than 1,000 residents per year. 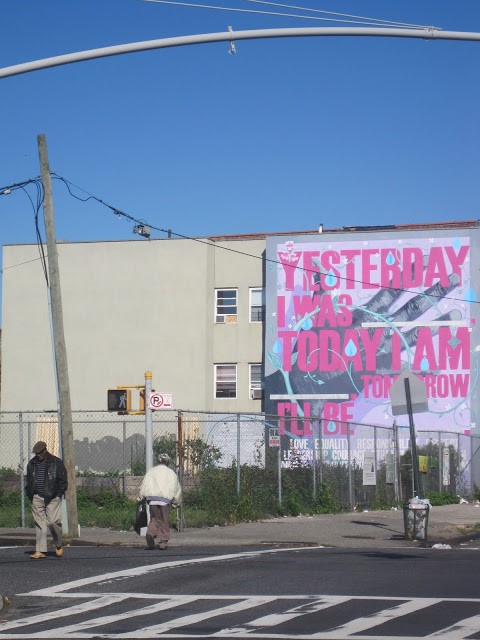 Three of the DPKO staff members who visited Brownsville are justice experts from the Criminal Law and Judicial Advisory Service (CLJAS), which supports more than 670 justice and corrections advisers deployed to 12 peace operations globally.  They were seeking to learn of new practices, including trust-building with criminal justice institutions, that could be transferred or applied to post-conflict settings.
One unique feature of the Justice Center is that none of its staff come from a legal background.  As Director Brodick explained, “Of course, once we have the court open, we will have lawyers on staff.  […]In this start-up phase, we need people who can simply ask the question, ‘How can we do our jobs better?  How do you get people to think differently about the criminal justice system?’”  The 25 full-time staff members based in Brownsville include community mediators, social workers, case workers and even an anthropologist – some of whom come from within the neighbourhood itself.
It was notable that the planning and establishment of the new court is likely to take 7-10 years, with much of that time being dedicated to building trust with the community and mobilizing resources from the local government..  This timeline would prove challenging for a peace operation, whose whole lifespan could be less than that.  The Justice Center explained that Brownsville is a community that feels it has not been well served by the justice system.  Going in and “dropping in” a court, in an area that already has a high concentration of police, as well as a detention facility, may not be well received by the community.  Years of conducting outreach and garnering local buy-in is required for a court to be accepted and, ultimately, successful.
+ 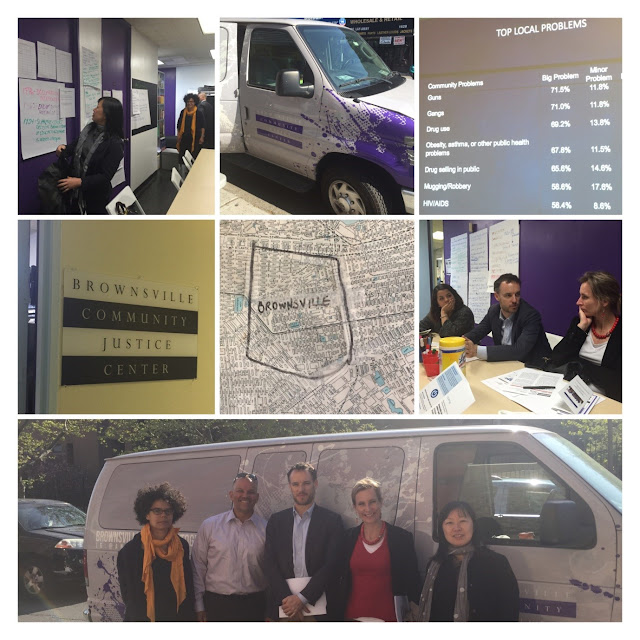 The Center focuses on small, visible and tangible wins, such as a parking lot near the subway tracks that had become a crime hot-spot.  Through the Center’s advocacy and support, the parking lot now hosts a farmer’s market – the second highest grossing in the city – every Friday, Saturday and Sunday during the spring and summer months.


As one drives down Pitkin Avenue to Mother Gaston Boulevard, it is difficult not to notice the brightly coloured murals dotting the neighbourhood’s blocks.  These murals represent different themes – community safety and cohesion, civic responsibility  and youth empowerment – that tell a different story of Brownsville, one not defined by crime data but by resilience, strength and hope for the future
Posted by BCJC at 12:47 PM