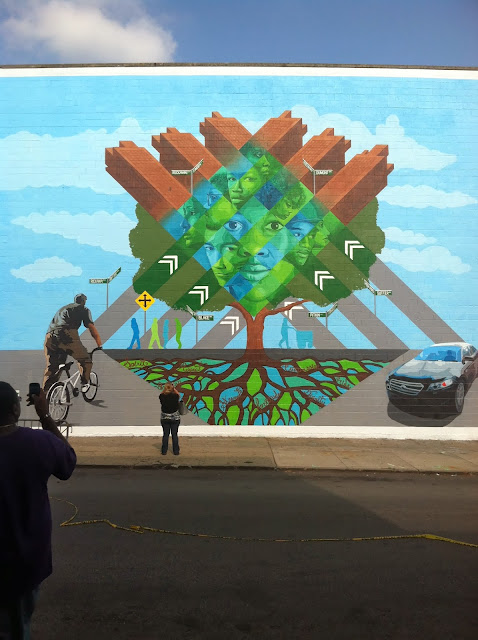 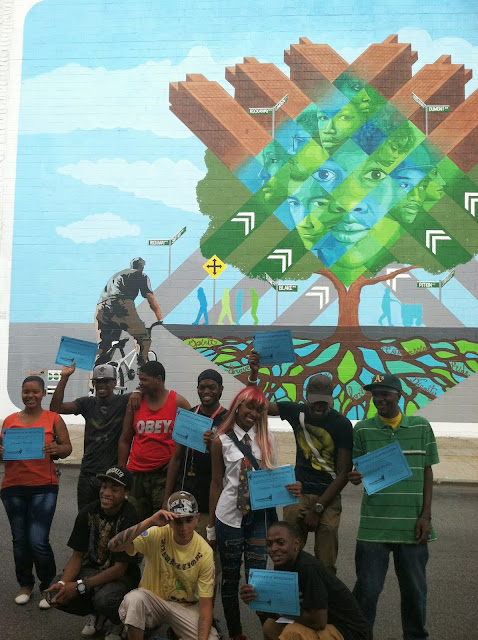 Brownsville Justice Community Program participants lift their certificates underneath the piercing gaze of the mural.


Ten of Brownsville’s young self-starters dedicated eight weeks of their summer to help bring revitalization and a “shared streets” ethos to Pitkin Avenue.  The majority of participants are part of a program at the Center called Justice Community, which works with sixty neighborhood youth annually. These young enthusiasts participate in service projects, internships, and educational and career development workshops to help them build a stronger future for themselves, their families and their community. 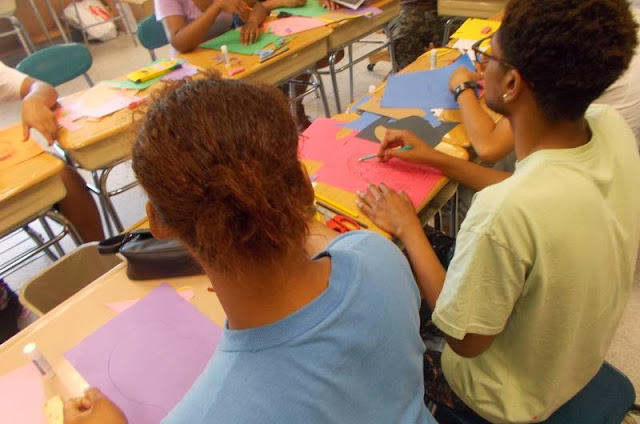 Photo courtesy of Groundswell’s blog “On The Wall”


For the first two weeks of the project, the participants brainstormed at Public School 156.  During this initial think tank, Brownsville’s future, assets, and landmarks were highlighted as important components needing representation in the mural. 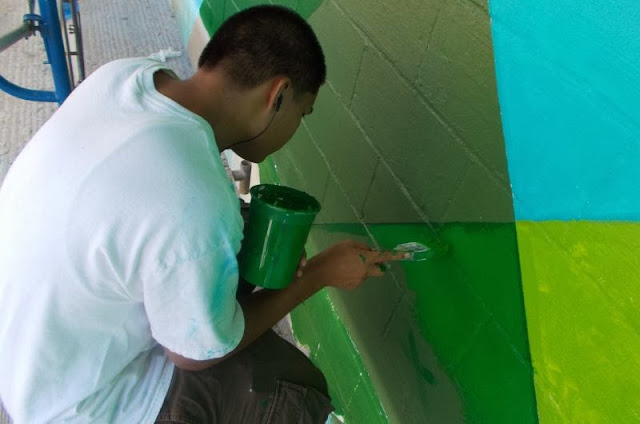 Photo courtesy of Groundswell’s blog “On The Wall”

During the third week, the participants attended scaffolding training which culminated in an OSHA certification, opening potential employment opportunities in construction and maintenance.  Then the participants spent several weeks working together as a group to accomplish the installation of the mural. 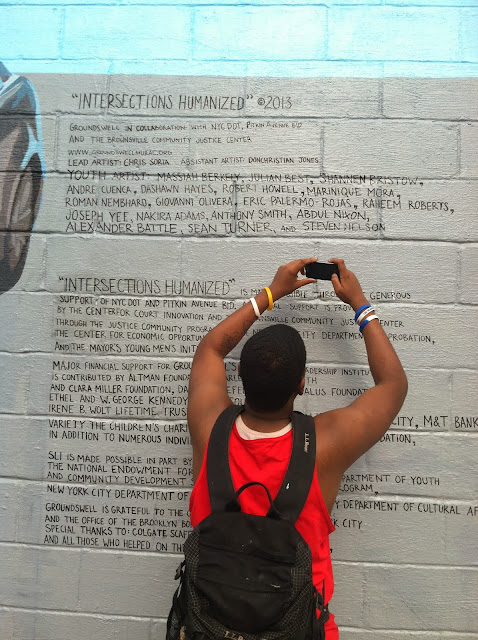 (Steven snapping a picture of his name to document his efforts)

Taking pride in their work and community, many of the participants took photos and brought family members to the Livable Streets Pitkin Avenue Mural Dedication event, a community wide reveal showcasing the completed piece. 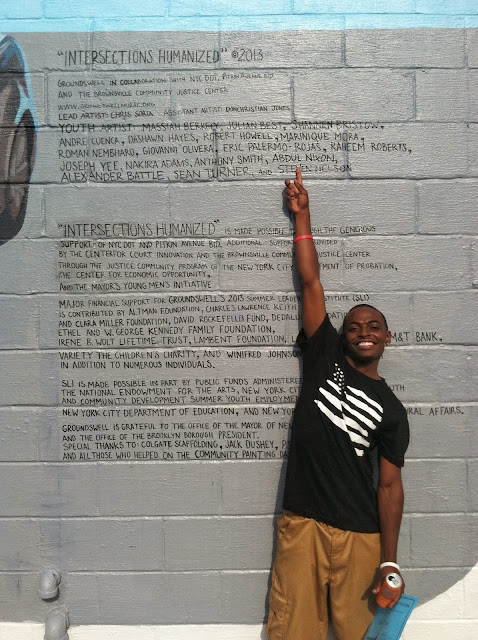 (Abdul, known as “Buddha,” taking pride in his contribution)

Some participants expressed feeling a heightened sense of fulfillment while developing, showcasing, and living with such a monumental and meaningful piece of art in their neighborhood.  Other members noted their appreciation for the ability to say, “I did that!” to their peers when passing the mural during their commute. 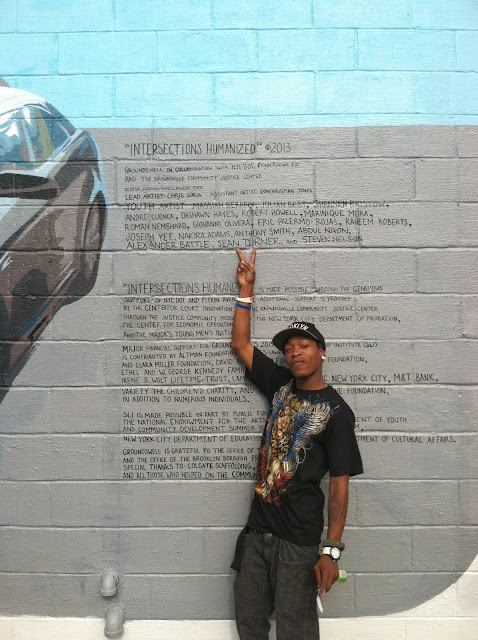 At the reveal, participants recounted returning home with paint all over their clothes after a hard day of work in the summer sun, and how the unified work ethic at the mural site reinforced many of the attributes woven into the roots of the symbolic tree central to the mural.  When asked about the mural’s impact on Brownsville, Sean (pictured above) stated, “Rome was not built in a day,” alluding to his expectations for Brownsville’s development. 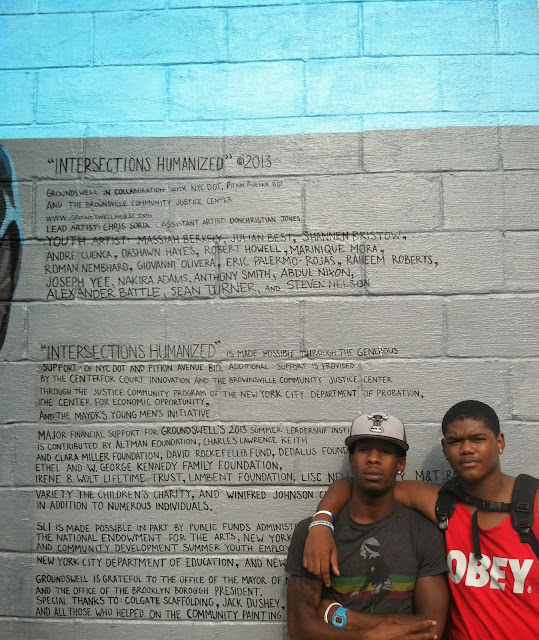 Dashawn (pictured above left) reflected, “It was a life changing experience.  It was something different and new.  There was so much positive energy knowing everybody came together to do something nice in Brownsville.” 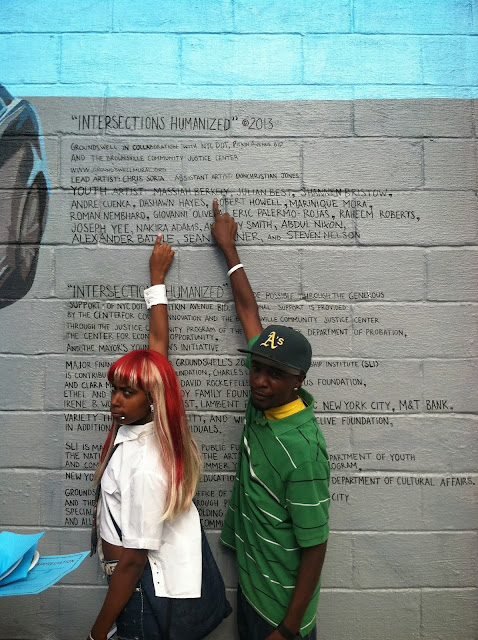 Nakira (“NuNu” to her friends) and Messiah (pictured above) allowed the excitement to motivate them to continue pursuing community benefit projects as well as their own personal goals.  “It was a cool experience and something new.  It was a learning experience.  I wish I could do more like it.  It was the first thing I did in the community where I could show people something I did,” explained Nunu as she reflected on her experience.  “I would definitely recommend this program to members of the community,” Messiah added.  NuNu and Messiah have since enrolled in the SUNY Brooklyn Educational Opportunity Center where they will continue their pursuit of higher education and entrepreneurship. 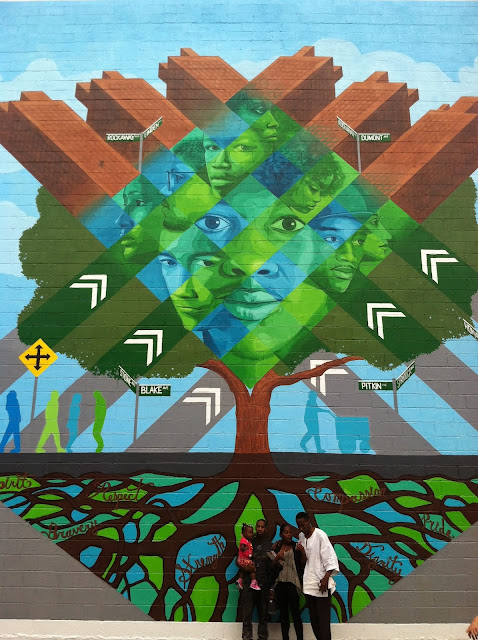 The completion of “Intersections Humanized” holds special meaning for Brownsville as it coincides with the announcement of a major grant from the National Endowment of the Arts awarded to Groundswell and the NYC Department of Probation.  This grant will usher in the “Transform/Restore: Brownsville” mural project, which is designed to engage local businesses, community members, and youth via a series of murals along Brownsville’s Pitkin Avenue.

Aside from the concrete skills attained and new accomplishments bolstering their resumes, many of the participants displayed newfound motivation to apply the energy and momentum they developed from the experience to further pursue their own personal goals.  In addition to Nunu and Messiah’s recent successes, Dashawn recently enrolled in a GED program.  Sean is currently participating in the Justice Center’s new Learning Lab initiative, and other participants have gone to complete a home health aide training program and start employment, CDL training, and continued job search and work readiness programming at the Justice Center and elsewhere.

Thank you and congratulations to Groundswell, the New York City Department of Transportation, the Pitkin Avenue BID, the Brownsville Community Justice Center, the NYC Department of Probation, the Center for Economic Opportunity, the Mayor's Young Men's Initiative, the greater Brownsville community, Metro (check out their coverage here), and all of the participants who helped make this mural a great success!